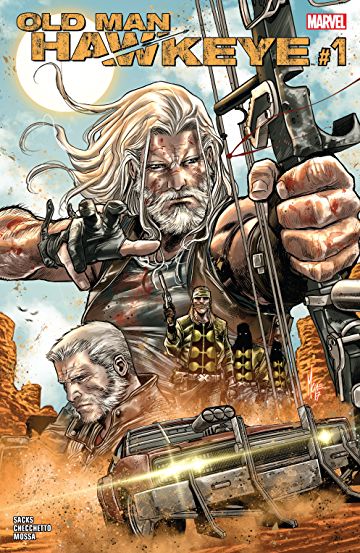 Old Man Hawkeye finally gets HIS SIDE of the story told in this prequel series from the Old Man Logan story that came out years and years ago. One thing, I don’t talk about much is art, but the dystopian background art in this book is breathtaking. I really dig it. I feel like I’m in Mad Max Fury Road with Hawkeye by my side, and that is now my real life’s fantasy.

The background of this story is that 45 years ago the supervillains took over the world and killed all the heroes. Minus a few, like Hawkeye and Logan. Now the USA is divided up into these dirty ass territories where people live half-lives under the fear of their terrifying regime. This is an America without Hope, or with Trump if it pleases you.

Clint Barton AKA Hawkeye has been hired by Jebediah Hammer to protect him on a smuggling mission. Hawkeye doesn’t want to drive through a dangerous ravine because it is “bandit territory.” Or the equivalent of a rural state today I would say, as there are no rules in places like that. You ever been to a bar in Michigan when you’re 12? I have.

A sniper shoots the back part of the semi truck Hawkeye and Hammer are driving and they crash. Hammer is all “Why didn’t you see the rock?”

Um probably f*cking because there was no f*cking rock.

He thinks they ran over a rock! I, mean, I wasn’t there but that seems pretty dumb to me.

They get out of the truck and Hawkeye is looking for a jack to fix the truck up but then allofasudden there are 9 guys right behind him wearing bandanas and holding guns.

The bandits want whatever they’re smuggling, but Hawkeye has other plans.

He then “THOK!S” them all in the head with arrows, all but one I mean.

As it turns out, he’s got glaucoma. Since he’s not in California or Colorado I’m sure he’s not even getting the right kind of treatment for it either.

His doctor is Claire Temple, a former love interest of Luke Cage.

Hawkeye tells her that he want’s vengeance on the villains for killing all of his friends as he lovingly strokes a picture of the Power Man.

She tells him he only has a few weeks to a few months before he goes completely blind and advises him that if he wants to do anything or see anything, to do it now.

So he goes to see Logan, because they are best friends, except only in Clint’s head. Logan does not seem too happy to see Clint.

Oh, and Clint brought him an X-Box for his son. Like, what? Why? 45 years ago? What year does this take place? Why are there still X-Boxes lying around? Also, this deserted Mad Max looking place seems like electricity is more of a luxury than a standard, so I’m a bit confused.

Clint informs Logan that he wants justice, and Logan is like “Nah, I have a family. Get out of here.”

So Hawkeye is like, “whatever take this old-ass X-Box anyway, ho.”

So before he embarks on his next mission he goes to see his daughter, Ashley. His ex-wife is chilling at home with her Ultron-8 robot husband or something. It’s all very strange and I don’t understand it.

Ashley is this emo-ish rocker chick that throws darts at a poster of her father in his purple Hawkeye uniform for fun. Great haircut though.

Also, why does this girl look white and have blue eyes if her mother is black? Da fuq? She can have brown eyes and darker skin and she can still be Clint’s daughter.

Anyways, this whole exchange is very awkward and sad. He doesn’t know how to talk to her and she’s pushing him away because he’s never been there for her, and she just wants him to try harder, but he doesn’t know that because she won’t tell him that.

Ash: Why are you here?

Clint: I wanted to see you, I’m going somewhere and I might not come back.

HEARTBREAKING. But did we expect Hawkeye to be a good father? This is why we need abortions, people.

Hawkeye goes to cry by his car outside, and in other news, that bandit that he missed is wandering through the mountains dying of thirst. He scoops up some water, but when he puts it to his lips he realizes that it’s black. Which is unexpected, to say the least. What is even more unexpected is that the black water is not even water, nor is it a liquid, it’s a symbiote. Ya know, like Venom. Or exactly Venom, I should say.

Two redneck looking sheriffs come upon the scene of where Hawkeye shot eight dudes and they’re like, “looks me to like that there is some bandit on bandit crime I’ll tell ya what.”

Then this guy in the shadows with a red laser eye is all, “no, you’re dumb.”

Sherriffs: I say now, ha-why are you at this crime scene, ma’boy?

Sherriff: Ohhhh you’re Old Man Bullseye. I see. Only with a laser eye and an evil cliche mustache.

Bullseye: Just call me Bullseye. Or Lester even.

Why is there, like, mush coming out from around his eye-thing? What the f*ck is happening here?

I can’t wait to see what happens next! I mean, I already purchased #2, so I know what happens immediately next, but I have a feeling this series is gonna be a good one! What do you guys think??