We all know Deadpool. Merc with a mouth. We all love him. And if you don’t you can get the fuck off this blog right now.

This issue is the #1 issue in a series of 6. I think. Which is great because I like these shorter stories that have proper endings n shit. SAGA WILL NEVER END THO THANK GOD!

So Deadpool is back to his roots basically of fighting for whoever has the biggest paycheck for him. His roots to me are his team up with Cable though. That was the first series I read where I fell completely in love with him. UGH it was sooo funny. True Masterpiece. All around great work. SPEAKING OF GREAT WORK. THIS PIECE OF SHIT WAS WRITTEN BY CULLEN BUNN AND THE MASTERFUL ART WAS CREATED BY MARK BAGLEY. BOOM.

Anyways out story begins with a group of soldiers or something on a plane about to make a drop or do something crazy in Bagalia and they’re reminiscing over the crazy times they had in Colombia. I wonder if they ran into Hit-Girl? Probs not because they would all be dead.

We don’t see Deadpool at first in the plane, but we do see his yellow caption bubbles.

Cause he crazy. Remember when he had three personalities? What was that about?

Everyone is chatting and two men decide to talk shit about Deadpool right in front of him saying they don’t like him. Deadpool kinda looks at that ginger kid and assumes they’re talking about him. Which, he does have red hair so its possible.

Now Deadpool’s vapors have made him decide to murder everyone on the plane. Which can’t be the plan can it? The boss wanted Deadpool on the plane and all but why charter a whole plane in the sky and arm these dudes to the T and then place one mercenary on the plane to kill them all? Like if you’re gonna go through the trouble of getting a plane that you know is going to be destroyed and you’re totally fine with that, then just put a bomb on there or something.

Deadpool stabs everyone while they shoot at him, which I don’t think gunshots are healthy for planes. 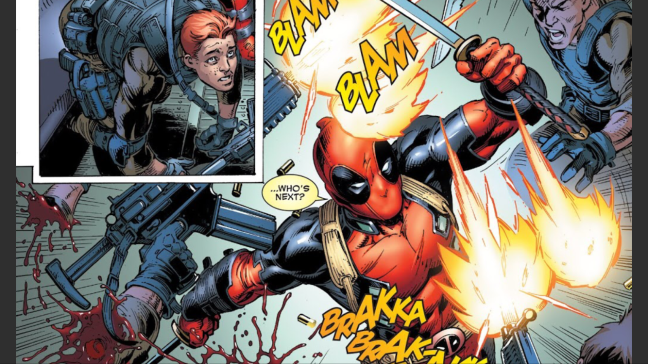 Deadpool waxes poetically about how the gunfire is unnecessary, like not only is it damaging the plane, they don’t just pass through his body. Some of them get lodged. And he doesn’t have enough fiber in his diet to get them through.

Then he goes on to shoot the pilots despite the fact that he does not know how to pilot a plane. It turns out all of this happened because of something that came about a few days ago. When he met Weasel in a supermarket.

Wade/Deadpool is concerned that someone is out to get Weasel because the Weese is being a bit jumpier than usual. Then Wade nonchalantly mentions that when he retires he plans on continuing to make scenes in public places.

So Weasel gives him the job. Apparently, some scary monster that used to be a part of the HAND broke out from the hand and now he’s built his own army of ninjas. But everyone hates him because he broke free from the HAND and you can’t do that without dying. Like the Crips and Bloods or whatever. Crime lyfe is crazy.

Then Weese shows him the picture of the guy who was on the plane, Samson “Scars” Green. He runs his own mercenary “outfit” with soldiers from various bs outlets like Hydra and SHIELD.

Weasel is like which one do you want to murder because we can make a lot of money taking either one of them down.

That brings us back to doe. I mean the plane. He’s standing over the dead bodies of the dumb ass mercenaries, as his plane crashes down into the territory of the HAND runaway monster guy.

SO THEN The HAND guy is like “shoot it down” to his minions, and they make the plane explode, but it was all a part of the plan. Deadpool strapped all the dead bodies into these flying devices and attacks all the shojen soldiers or whatever the fuck they call themselves. 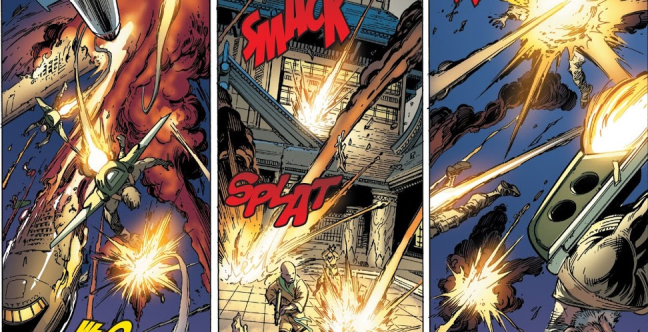 Deadpool straps himself in too, but he’s still alive.

But he lyke broke his sword. 😦

He beats up these bald buddah wannabes and gets kinda upset because there are no ninjas.

Luckily if you think it they will come. So all these ninjas show up and he beats them all up!

From this scene we’re in Wade Wilson’s apartment and lil Weezy is there. With a name tag on that says “Jack” that sounds about right. The timeline is after the grocery store and before the plane. V CONFUSING.

Weseal shows Deadpool his new set of weapons and they’re pretty nice but you can be the judge.

Weasel warns Deadpool that doing two jobs at once is a little much, but whatever. Then Deadpool is like “erm I told you I want to retire and put down roots somewhere. I need the money to get out of this apartment and buy an island. I WANNA GROW UP! I don’t get the same thrills from killing anymore. I wanna have babies and get married. REAL THRILLS.”

Just then Weasel takes a mysterious phone call from a stranger who is demanding a dozen of something. The convo is mad awkward and is reminiscent of when a friend of yours answers the phone call of their significant other whom they have not told you about yet. IN FACT, ITS EXACTLY LIKE THAT.

BACK TO NINJA KILLING.

Deadpool kills all the ninjas despite the fact that they all have iron fists. Spoiler. He throws his baby deadpool grenades at them and they explode and their body parts fly everywhere!

Deadpool catches one iron and fist and says hrm.

Deadpool comes face to face with the Monster man who has tentacles btw. Weird. Anyways their convo is like this.

Monster: You look like you’re about to keel over and die.

DP: No. I just assumed you would see what I did to your whole crew of ninjas and baby Buddhas and just run away?

The monster brings Deadpool close to him and looks him in the eye as he has his tentacles piercing through him and Deadpool is all, “bad idea.”

Cause you know he has a glowing iron fist, So he punches the monster with it and lyke this happens.

Deadpool punches this guy and passes out after calling himself the Immoral Deadpoolfist, sworn defender of Pepe’s taco house, eater of multiple nacho baskets. etc, etc.

After he passes out from using that much power, we’re in a new scene where he’s riding in Weasel’s car. Wade/ DP scrounges around Weseal’s glove box and pulls out an ultra ugly gold wedding band. I don’t get it why do people get those? Anyways, Wade is like wtf you’re married am I the other woman?? And Weasel is like Clarice, my wife, doesn’t know about any of this. But I can’t give it up because being normal sucks. Then Wade is like you’ve got a good thing going, don’t fuck it up by staying in this merc business.

A few days later he’s on his couch texting weasel looking for jobs. But he never responds.

What did you guys think about this issue? I was unimpressed. The quips were okay, but all in all I think everything could have been better. It just seems a little surface level. Deadpool can be so much fun and this fell flat. I am unimpressed.