I’ve recapped some pretty badass indie comics, but you know me and how much I love my Marvel for the money shit. I mean they’re paying the stacks so they’re getting the talent here. West Coast is kitschy. I like it. I lol’d because Kelly Thompson is hilarious and I pretend she’s my best friend every day. WHAT? NO I DON’T! YOU’RE CRAZY!

So what I’m getting as I read this comic book is that they are on a reality TV show and Old Man Hawkeye, as he likes to be called now, is having issues understanding the whole concept of what it means to be on a reality show. So why is there a reality show you ask? Because Young Woman Hawkeye, as she likes to be called now, decided to gather a group of her buddies and create an “Avengers” team for the West Coast. Very original idea, I know. But before we laugh at Marvel as they laugh all the way to the bank let’s think about how many Goddamn Spider-Mans there are in this universe and how many times all of them have been killed and then we can start discussing this remake of the and West Coast Avengers.

And then we get a gratuitous scene of the team forming because of a tragedy or whatever. 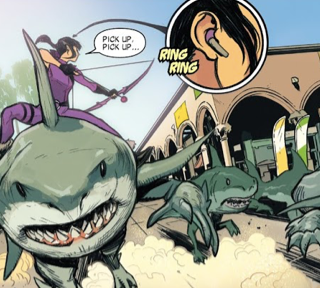 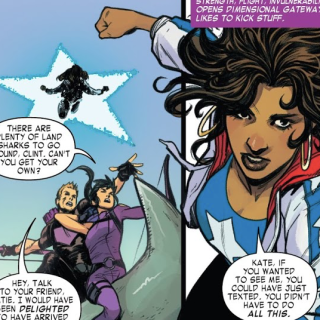 They did it! Yay! Go team! Nom pizza!

Obviously, after this team-up, Kate gets the brilliant idea to form a team. And she’s like “um, idk. How about you do it, Clint?” and Clint is all “I don’t live here.” And Kate’s all “I called literally everyone I know.” And America Chavez is all “What about Noh-varr?” And Kate’s all “I’m not calling my ex boyfriend ew!” And Kate’s boyfriend whose name I forgot is all “What kind of name is that?” And Clint is all “The kind of name where you better hope she doesn’t call, man.”

OUCH! Clint is the sassiest.

So Kate decides that’s fine she’ll make a team. So she does what any responsible 20 something would do and creates a flyer.

BUT WHO WILL BE ON THE TEAM THEN!?

Well, she has to interview a lot of dopes. I don’t need to recap this because if you’ve seen Deadpool 2 it’s like that except everyone is hoping that she is Old Man Hawkeye instead of Young Woman Hawkeye.

But eventually this crazy ass bitch shows up.

And then the four plus one, team because Old Man Hawkeye isn’t “full-time” get together and discuss their newfound group, when Gwendolyn asks about a paycheck. Kate replies that no one wants to fund them. Enter this douchebag;

And so they sold out to be on reality TV.

And now that guy Quentin is on the team and I just hate him. You know names have power, okay? And if you’re gonna do that to someone do it to someone you hate, not someone you gave birth to.

Anyways, the team gets all settled in. Kate and her bf Johnny get cozy while in the next room, Quentin and Gwenpool are arguing because Gwen piled a bunch of wet towels on the floor of Quentin’s bedroom. And Quentin is all “why?” And Gwen is all, “I thought that’s how you liked your towels, wet and piled on the floor.” BURNNN!!!

Cause he’s a messy roommate. Get it?

No? Okay. Well then they get called out to take care of some superhero business finally and it’s none other than a giant Tygra terrorizing the West Coast. Wow what a throwback thirsty thursday amiright??

They’re pulling out all the stops.

So Quentin decides he’s gonna fuck her shit up, but it’s Old Man Hawkeye’s friend so he’s like “erm, no, that’s my friend.” And Quentin is like I’m gonna hurt her, then Tygra punched him far, far away.

Later in his interview room with the reality show people he’s all “I’m cool. I was distracted trying to protect the powerless Hawkeye. Wahhh.”

So then there’s a battle, blah blah blah. GUESS WHO WINS?
NOT THE WEST COAST AVENGERS!

They can’t defeat her so this golden man swoops in with six-pack abs and decides to save the day. His name is B.R.O.D.A.K. So it’s obviously M.O.D.O.K. 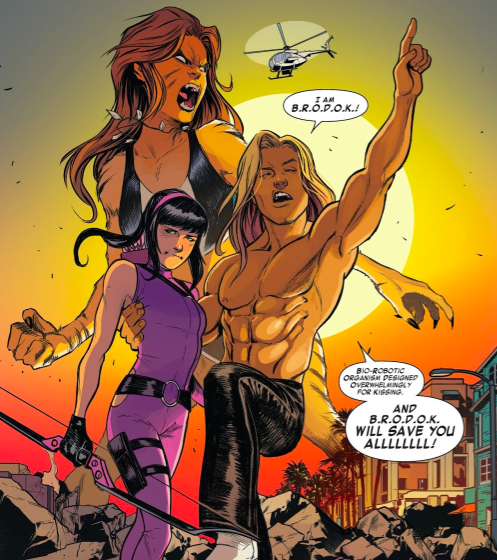 So what did ya’ll think? I have to be honest I’ve read more than the first issue, and I have to say it’s pretty campy but it’s fun! Don’t we need a break from the cries that are surely to come in this week’s Game of Thrones episode! Not everything has to be the Sandman after all!